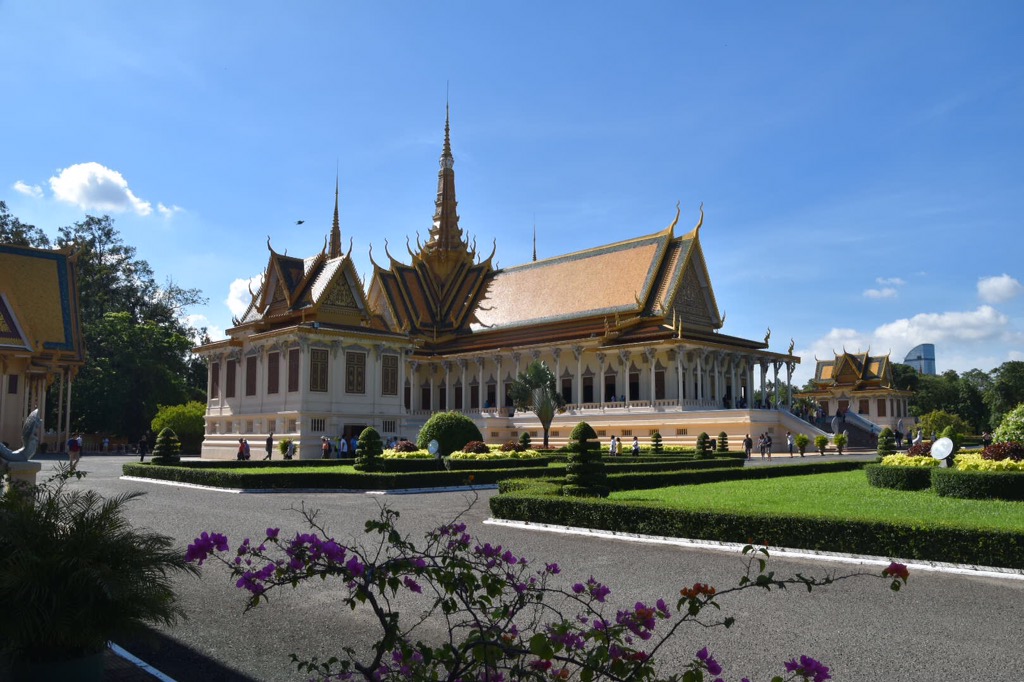 Like many inhabitants of Southeast Asia, Cambodians don’t buy a family car: they buy a family motorbike that can accommodate up to six people. Remaining “slim” is therefore a requirement for outings on the family transportation device. One way to retain the sylphlike physique is through a diet of insects and boy do the Cambodians like their insects.

Our journey continued south to Phnom Penh which is the capital and most populated city of Cambodia. We said goodbye to David our guide for three days in Siem Reap and to beer at 50 cents a glass. David’s father was killed by the Khmer Rouge six months before he was born and his mother was killed six months after he was born. Many others his age and were orphaned during Pol Pot’s reign.

After lunch, a boat trip and a cycle, we arrived at our PP hotel which was a change from the £19 a night hostelry we were meant to stay at. We were now at one for £27 a night but with no pool. My room was hotter than the surface of the sun and the air conditioning had given up trying. I had one hanger in the wardrobe, two of the mankiest towels I’ve ever seen and no seat on the toilet. We were here for two nights and probably it was the worst place we’ve stayed at on the trip. After this place we have five more nights in hotels chosen for their economy rather than their amenities and well appointed rooms (I haven’t seen a Corby trouser press in days).

We all went for dinner in a bar overlooking the Mekong river which was so lovely that I completely forgot about my lack of a toilet seat.

On Monday cycling was replaced by a tour of Phnom Penh with the first stop at one of the 400 killing fields dotted around Cambodia. It was immensely moving and I was close to tears walking around the site which included the largest collection of skulls I’ve seen and a number of mass graves. The term autogenecide was used to describe how Pol Pot killed a quarter of the population including the educated and opinionated as the regime sent millions of urban dwellers to the countryside to work on various projects for the common good. Anyone wearing spectacles was killed on the basis that they were intelligent and the uneducated were brainwashed with communist propaganda. One of the more disturbing details of our tour was that the entrance fee goes to the scapegoat families who are former high ranking commanders of the Khmer Rouge who still occupy positions within government. Although there is news and internet censorship, things are slowly changing through social media although speaking out publicly often leads to being killed. One curious aspect which keeps the status quo is that 95% of the population is Buddhist which adopts a more peaceful way of life and with philosophical concepts such as karma, the Cambodian people are not as hungry for justice as they might otherwise be. Zenith, our guide (top of his profession) was ten years old when his family were moved out from the city into the countryside. He was separated from his parents at some point and they were killed. Many years later he was reunited with his siblings.After a stop at the genocide museum we were all feeling a bit low so we had some tucker and then went off to the Museum of Cambodia. Well, I didn’t. A lovely building from the outside but I knew what would be lurking inside so I jumped in a tuk-tuk and went and had a drink in the Raffles hotel. Our last stop of the day was the Royal Palace which is a complex of rather ornate buildings and our guide talked us to within an inch of our lives. Thai Tom had arranged a private boat trip for about 8 of us to watch the sunset on the Mekong river. Then dinner with some lively banter, mostly about sex (I’m being labelled the instigator but in all honesty they don’t need much encouragement). Back at the hotel I retired early and missed out on some fireworks.